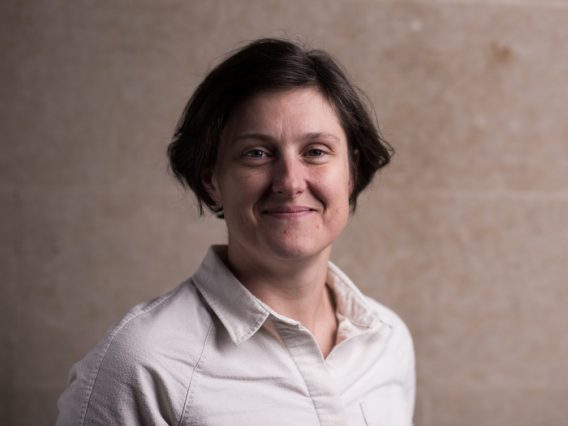 Next up in our ‘Introducing…’ series is Lizzie Mee.

Lizzie is the Community Heritage Coordinator for Tiverton.

Hello, my name is Lizzie Mee and I’m the Community Heritage Co-ordinator for Tiverton. I have a long history with heritage and love finding hidden stories from the past. I think that our heritage can have a profound impact on our identities, and can change the way we view the world (and ourselves in it).

For my 40th year, my Dad gave me an extensive family tree with 16 columns going back along the male and female lines, some of which went back to Tudor England. My Dad knows me well enough to include the female line, and one of the important bits of research he did was to speak to my Grandma before she died. This was a while ago now, so like most records of history this one has been a long time in the making. It’s handwritten on a big piece of A1 card – with one only mistake; my Dad’s part of a past generation of journalists who had to use a typewriter and correction fluid, so he’s trained to avoid errors!

Some of my more interesting ancestors include Dutch signpainters – who have a street named after them somewhere (or so I’ve heard). Other stories include a very poor tin mining line that can be traced back to 17th century Cornwall – later on they moved to Canada to try their luck there, only to return later as ‘travelling salesmen’.

I think we can have a view of our heritage as being simple but most of the time it’s nothing like that….just as Tiverton’s history is far from simple. Tiverton like much of Devon appears to be mostly White British but there are many stories of people with different cultural heritage out there. It’s been both a privilege and an adventure to start to uncover some of the different family stories that exist here. So far, the people (both historical and contemporary) who form the winding narrative of our project include those from Surinam, Africa (via North America), the Netherlands, Slovenia, Kosovo, Slovakia, Ukraine, Germany, India, China (Hong Kong) and Poland… with more to come.

Look out for these stories and get in touch if you have something to share!