Gail Hickman describes herself as “a cultural mongrel”, with Irish, English, Scottish and Viking heritage. She was born and lived most of her life in South Africa, and is an honorary Zulu. At age 50 she decided to move to England to escape the violence in her homeland. She has lived in Bideford for almost 20 years.

Having a British passport and knowing this part of the country so well, Gail considers North Devon very much her home. However, there are times when she is still treated as a ‘foreigner’ by the locals, which can leave her feeling very lonely and isolated.

“In South Africa, we have 11 official languages and 23 black languages, right? … So you’re never stuck for a word or a situation. South African English is so colourful, because you just draw from all these languages. And I knew the moment I arrived here, as I stepped off the plane, I knew I had to speak English only, and not draw [on] all these words. Because if people couldn’t understand me, it would be even worse. So I spoke pure English.”

Listen to highlights from Gail’s interview below:

Click Gail‘s image to read the transcript of her interview: 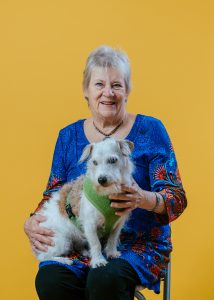