I am writing this blog on 11th November, Remembrance Day. A time to remember the service and sacrifice of the men and women who fought in conflicts across the years. 100 years since that first Remembrance Day in 2019, my thoughts turned to the First World War and what we might discover about life in Okehampton 100 years ago.

I recently met local historian, Chris Walpole. He lives in the village of Belstone, just south of Okehampton, nestled on the northern edge of Dartmoor. Whilst researching life in the village in the First World War, he came across some newspaper items relating to Belgian refugees in Devon, which he kindly shared with me. I hadn’t realised just how many Belgians fled to Britain when the country was invaded by Germany at the start of the war in 1914. Britain hosted 250,000 refugees and they were accommodated in towns and villages right across the country, including in Devon. Housing, clothes and food were provided by local people and money was raised to support the refugees during their stay. One such house in North Tawton is still known as Belgium House to this day.

The Telling Our Stories Exeter Project includes a photograph of Alice Clapp, who led the committee to support Belgian Refugees in Exeter. Here’s a picture of her logbook, which is kept at the Devon Records Centre. 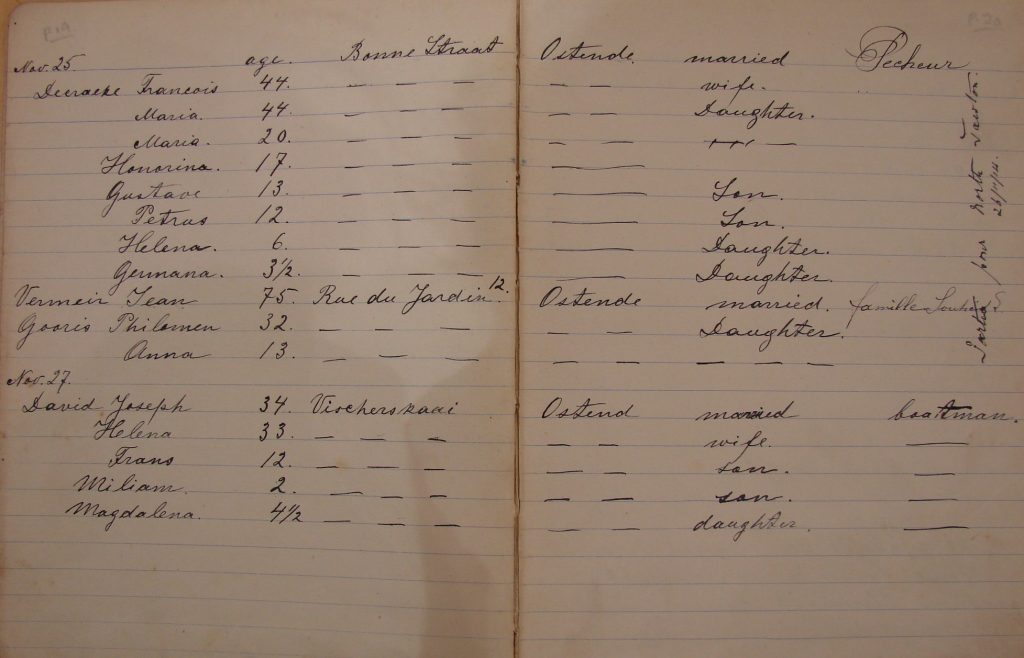 Alice Clapp’s logbook, recording the details of Belgian refugees accommodated in the area during the First World War. Photo: Chris Walpole, by permission of the Devon Heritage Centre.

Extracts from the Devon & Exeter Gazette:

3.11. 1914: ‘… At the end of last week a further 20 Belgian refugees arrived at Bideford, making a total of 45, who are now being maintained by the town and its immediate district… Exeter has now cared for some 800 Belgian refugees, and while many of them have been placed in homes in the neighbourhood, a considerable number are still housed in Exeter, and are being most hospitably treated.’

3.11. 1914: ‘Chagford and Drewsteignton people are to be congratulated on the success of their efforts in providing and equipping a small Convalescent Home (registered under War Office and Admiralty) for taking wounded soldiers or sailors who are able to leave hospitals, but still require care.  The cottage, which has been lent by Mr Templer, of Furlong, is now occupied by six wounded Belgian soldiers… Two of the patients hope soon to be strong enough to return to the front, but the rest have been too badly wounded to serve again in the battlefield…’

20.11. 1914: ‘At the [Okehampton] Drill Hall an enjoyable entertainment has been given in aid of the Belgian Relief Fund.  There was a crowded house.  The concert realised over £13…’