The Okehampton branch of the project is fortunate to have volunteers involved from the local Polish community: people who have come to live in the UK in the last 20 years. With their help, we hope to uncover the history of the Poles who came to Okehampton over 75 years ago during the Second World War, when Okehampton played host to the Polish Navy.

After the war, the Rugby Club base became a resettlement camp for Polish personnel who chose to stay in the UK. The Polish Resettlement Act of 1947 allowed 200,000 Poles who had fought with Britain in the war, and were opposed to the Communist takeover of Poland, to remain and settle in the UK. 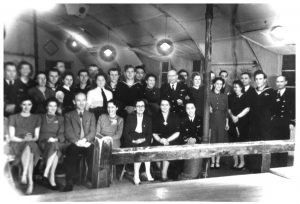 A fantastic source of information is a history of the Polish Navy published in 2012, to mark its 90th anniversary year. A copy of the book was presented to the then Mayor of Okehampton, Rev. Mike Davies, and is now held by the town council. However, the contents of the book remain a mystery to most in the town, as it is written in Polish. With the help of our Polish volunteers, we are planning to translate the relevant chapter into English, so that English-speaking residents and visitors can understand the important part Okehampton played in the history of the Polish Navy – and that the Navy played in the history of Okehampton!

Do you have memories of Polish people living in Okehampton in the 1940s and 1950s?

Are you descended from Polish people who arrived in the area around the Second World War?

Please get in touch with your memories or your stories. We would be very interested to hear from you.