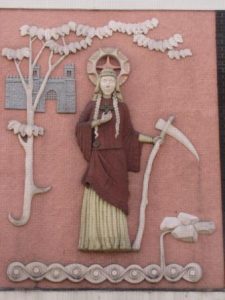 Legend says that Sidwell was a Saxon Christian girl living in Exeter in the 8th century. Her stepmother wanted her killed, and hired a reaper to do the job. He cut off her head with a scythe, and where it fell, water sprang up. This became the well of St Sidwell, revered for the miracle and a place of pilgrimage in Anglo-Saxon and Norman England.

The well was located at the junction of York Rd and Well St, right in front of St Sidwell school. In early medieval times, the water was channelled into the city through the earliest of the underground passages.

Her saint’s day is either 31st July, August 1st or 2nd

Some sources say she was Romano-British, others that she was Saxon. Whatever the truth about the girl, and about her origin, she lived in Exeter at a time of change. The period from the departure of the Romans (around 410) until the time of King Alfred (9th century) was a period of great upheaval in the South West, and throughout Britain, and written records are few.

The Saxons probably reached Exeter some time towards the end of the 7th century. So if the date for Sidwell of 740 is right, and if she was in fact Anglo-Saxon (ie English) then Sidwell was one of the earliest English settlers in Exeter, and one of the earliest speakers of a language that sounds like our modern English. If she was Romano-British, as others claim, then she spoke something more like Welsh or Latin, and was part of a retreating and shrinking culture of the Dumnonii, which would soon be confined to Cornwall, west of the river Tamar.

So this was a time of migrants, of battles and conquests, and of mixing of ethnic groups. And Exeter was, according to some scholars, the front line of this mixing.

In January 2014, year 4 students at St Sidwell school wrote and performed a play of her story. Read the script.