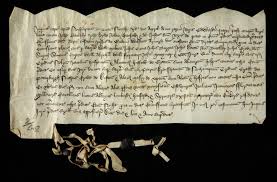 In 1440, King Henry VI needed money for his exchequer. Feelings against foreigners in the country were strong at the time, so parliament decided to ‘soak the foreigners’. The 1440 Alien Subsidy was the first of its kind, and it was collected off and on until 1487.

The collection of such a tax led to the compiling of detailed records of ‘aliens’ in England, many of which survive in the National Archive. The 1440 roll for Devon is in good condition (E179/95/100) written in Latin on parchment. It lists 675 individuals in the county – 342 with property (who paid 16d each) and 333 without property, who paid 6d each.

There is a project currently under way by York University to transcribe and index all the records.

It’s interesting to compare the figure of 675 in the county with an estimated Devon population of  around 100,000 at the time. So the percentage of the population who were ‘aliens’ was less than 1% at the time.