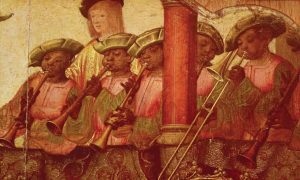 In 1522, Henry VIII ordered a military survey of the whole of England, to see who was ready for war, and to measure the wealth of his subjects. This was two years after his historic meeting with Francis I of France at the Field of the Cloth of Gold.

The constables of each parish in the country recorded the name of each man living there, whether he was ready or not to go to war, and his worth in pounds, shillings and pence. It was a sort of census, but only adult men were recorded: no women, no children.

Also luckily, the survey recorded ‘aliens’ separately, including their place of birth.

Of the 1363 adult men listed in Exeter at that time, 66 were aliens. 34 were from Germany and the Low Countries, 29 were from what is now France (mostly Brittany and Normandy). Two were from Italy (Lucca and Lombardy). One resident of St Perock parish was listed as “Peter Blackmore, a moren borne”, in other words a Black man. Is this Exeter’s first Black resident?

The picture on the right shows part of the page for St Petrocks, with the relevant entry being the second one after the title.

Several of the aliens listed were quite prosperous. The parish of St George boasted a parson called “Sir Richard Vyllayermerii, born in France”. His benefice was worth £10 a year.

John Poke “a stranger born in Normandy” was worth £20, and had two servants. His name can still be found in Exeter in the next tax return in 1544, so he clearly found the city conducive.

Remarkably, 66 out of 1363 is around 5%. That may have been one of the highest proportions of ‘aliens’ in the whole country, and shows how migrant populations can go up and down over time.

You can read the data in full here or visit the Devon Record Office and see for yourself!
Research by Ghee Bowman and Olivia Hall