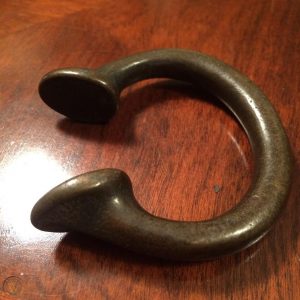 The foundry in St Thomas, Cowick Street/Albany Road, is dated from 1525-1625 and was owned by John Birdall. It closed when he died.

During excavations in 1984, manilla moulds were found. Manillas were armlets cast from bronze and copper (red gold) and used as currency and status symbols in West Africa. They were traded by the Europeans for goods such as gold, ivory, pepper and human beings. The West of the Exe Living here project website has some good photos.

It has long been known that foundries in Bristol and Birmingham made manillas for export in the 1700 and 1800s. However, the Cowick Street mould is dated to the 1500s, suggesting it to be the earliest evidence for the production of manillas in Britain. The museum in Williamsburg, Virginia has an interesting page on manillas.

This also suggests Exeter’s earlier than previously thought links with trade in Africa and one of the links between Exeter and the slave trade. Look at our teaching resource for more information.