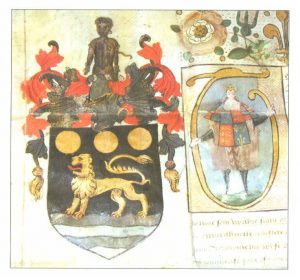 John Hawkins (born in Plymouth in 1532) conducted the first of his three slave raids on the coast of West Africa in 1562, capturing people and taking them across the Atlantic for sale in Hispaniola.

Hawkins is sometimes credited with inventing the triangular slave trade, making a profit on each leg of the voyage. Astoundingly, he was so proud of his work trafficking humans, that he even had a slave added to his coat of arms (picture from North Devon Record Office).

Hawkins’ 2nd cousin, Francis Drake, accompanied him on at least one voyage.

Or listen to this extract from the BBC website.