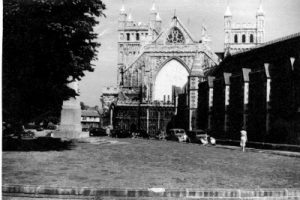 What is meant by a ‘blackmore’ ? ‘Blackmore’ is a variant of the archaic and derogatory ‘blackamoor’ which appeared circa 1500s and was common parlance in Elizabethan England.  One interpration being it is a variant of ‘Black Moor’ denoting a dark skinned person of North African origin.

The parish records of St. Mary Major Church (demolished 1971, its site marked by the spire on the cathedral green) list the burial of “Thomas, sonne of a blackmore” in 1632. According to Lucy MacKeith’s book, this was the earliest record of a Black person in Exeter. We have since discovered that the 1522 survey of Exeter included a Black man.

Thomas was baptised 26 January 1632 at St. Mary Major, Exeter (Devon Record Office MF5).  Sadly his burial record can be found in the same parish 9 days later, 4 February 1632 (DRO, MF8). This record shows the presence of two Africans, Thomas and his mother, who may have been in Exeter for a while before 1632.  Interestingly Exeter has few records like this in the late 16th and early 17th century, compared with Plymouth, and even small Devon villages like Hatherleigh. Additional info gratefully received from Miranda Kaufman, you can find out more about Africans in Britain 1500 – 1640 by visiting http://www.mirandakaufmann.com/history.html