Community Researcher, Di Cooper (with Chantal Kouadio), investigates the Slavery Abolition Movement in Exeter uncovering significant support from the people of Exeter, with leading Quakers, Unitarians, MPs and businessmen among those who supported the Society for the Abolition of the Slave Trade founded by Thomas Clarkson in 1787. Di has compiled a fascinating array of documents from Exeter Flying Post and other sources which illuminate Exeter’s contribution to the Abolitionist’s cause. 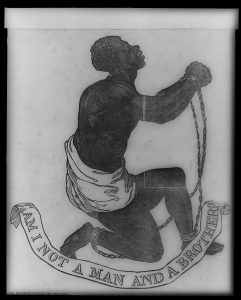 This image of the enchained African beseeching the, presumably, white audience to recognise his humanity was a powerful symbol in the Abolitionist movement. However, today we recognise that enslaved people played an active part in their liberation through resistance and rebellion on the plantations as well as in speaking and writing of their experiences of slavery to a British audience. The image gives an exclusively passive view of enslaved Africans and so we consider that it is no longer appropriate to use it to represent their movement towards Emancipation.