Thomas Clarkson (28 March 1760 – 26 September 1846) English abolitionist and leading campaigner against the slave trade in the British Empire. He helped found in 1787 The Society for Effecting the Abolition of the Slave Trade and helped achieve passing of the Slave Trade Act of 1807, which ended British trade in slaves. Described by the poet Samuel Taylor-Coleridge as ‘a moral steam engine’, Thomas Clarkson campaigned for the abolition of Slavery worldwide throughout his life. This portrait of Thomas Clarkson shows him holding a scroll, which reads ‘Slavery abolished, Jamaica August 1st 1838’. Image courtesy of the National Maritime Museum Greenwich, London, Michael Graham-Stewart Slavery Collection; mezzotint circa 1840.

On the 1st November 1788, Thomas Clarkson visited Exeter, as part of the campaign to gather support nationally for The Society for Effecting the Abolition of the Slave Trade. He was aged just 28.  This is the Handbill from 1/11/1788

detailing Exeter’s continuing support for an abolition committee and funding following a visit and speech from Thomas Clarkson at the Guildhall. He  is recorded in the Exeter Flying post as stating ‘every cubic inch of sugar we consume costs a cubic inch of human blood’; that his arguments were persuasive can be evidenced in the list of 250 Subscribers to the London branch of the Society for the Abolition of the Slave Trade which appeared in the Exeter Flying Post on 20th November 1788.  More about Exeter and the Slavery Aboltion Movement, the List of Subscribers and other related documents from Exeter’s Flying Post can be found in the research of community volunteer Di Cooper.

For more about Thomas Clarkson, visit The Abolition Project website

Handbill By permission of the Master and Fellows of St John’s
College, Cambridge 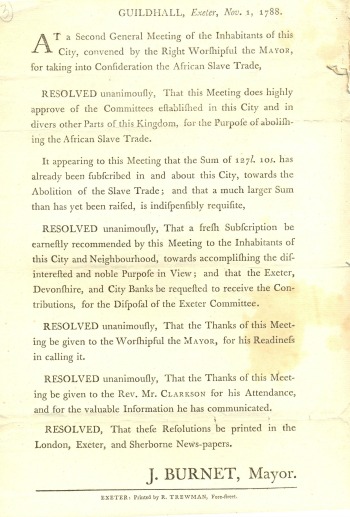