While the British slave trade was abolished in 1807, it was not until 1833 that an Act to abolish slavery itself was finally passed by the British Parliament. Even then, it was only possible for the Government of the day to get the Bill through both Houses of Parliament by promising to pay compensation to all British slave-owners for the loss of their ‘property’. A sum of 20 million pounds was set aside for this purpose.

The Porter family were major slave owners. with extensive sugar plantations in British Guiana. Thomas Porter I was born in Demerara and lived there for many years before retiring to Devon. When he died in 1815, his sons inherited his plantations. 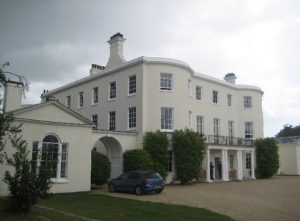 Rockbeare Manor as it is today

University College London have produced a fascinating website that provides full details of all the compensation payments.

Rockbeare Manor is now used as a wedding venue, while Winslade House now serves as a business and leisure hub.

Local historians have mistakenly reported that the Bishop of Exeter, Henry Phillpotts, personally benefitted from compensation. This was not the case. He was involved in claiming compensation on behalf of someone else.  However, his brother was involved in the slave trade and Bishop Phillpotts never spoke out against it.

More than 70 individuals from Devon received compensation when slavery was abolished. A local group (Legacies of Devon Slave-ownership Group – LDSG) is researching some of these individuals. Information can be found here.