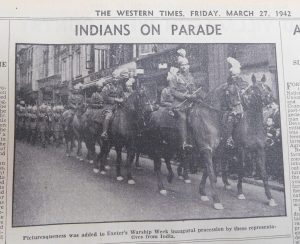 The four Mule Companies of the Royal Indian Army Service Corps were part of the British Expeditionary Force in France before Dunkirk. Three companies were evacuated at Dunkirk, the men of the fourth company were taken prisoner.

The 25th Company spent some time in Devon. Between November 1940 and May 1941 they were stationed at various places in South Devon, including Modbury, Loddiswell and Bigbury, Pitt Farm at East Allington, with the company HQ at Woodbarton Monastery, between Loddiswell and Halwell. See the webpage on Loddiswell station for some interesting stories about their time there.

There are three photos of them on page 56 of Gerald Wasley’s book, Devon at War. Read more about their story on the Commonwealth War Graves Commission website. There you’ll find records of the four who are buried in Plymouth.

The soldiers and their mounts were seen as being exotic and exciting, and were often invited to attend local marches and events. On March 15th 1941, they marched in the Torquay War Weapons Week parade, and in 15th February, in Exeter’s Warship Week parade. The Express & Echo featured a picture of them, with the caption “Picturesqueness was added to Exeter’s Warship Week inaugural procession by these representatives from India. They made an impressive feature and excited great interest.”