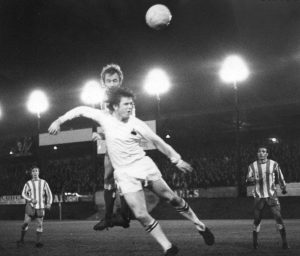 Bristol-Born Steve Stacey was Exeter’s first Black player. He played for the Grecians for two years, with 59 appearances between 1971 and 1973. The full back had previously played for Wrexham.

Steve later emigrated to Australia – read an interview with him.

Thanks to Andy Beer and Martin Weiler for telling us about Steve.

Martin Weiler, Co-ordinator of “Exeter City FC One Game One Community Group” interviewed Steve Stacey about his career. The interview was published in the Exeter City programme for their game on November 1st 2014 against Luton Town (1-1 draw).We reproduce the interview in full here.

Today’s One Game One Community match has the theme of race equality, an ever important issue in football and wider society. To mark this initiative The Grecian has caught up with Steve Stacey, City’s first black player, now living in Australia. Steve, a full back, joined Exeter in 1971 and played here for two seasons making 59 League appearances.

Steve was a pioneering black player, thought to be the first African American to play in England. The story of his heritage is embedded in World War Two. “I was born in Bristol on 27 August 1944” says Steve. “My father was Clarence Sims, a black American GI based in the Westcountry. He had been born in Mississippi Kemper County, an area which saw various atrocities against black people.

“At the time of my birth the US military was very highly segregated and US servicemen were under US law not British law. The military refused to grant my father permission to marry my mother who was from a poor white family simply because he was black and she was white”.

“At the end of the war my father left and it took my family 40 odd years to catch up with him in New York. We met a couple of times but both he and my Mum have now passed on”.

Steve started his professional career at Bristol City and later also played at Wrexham (105 appearances; 6 goals), Ipswich, Charlton, Chester, Bristol City (second spell) and Bath City. “Being black and playing football in the 60s and 70s was lonely” recalls Steve. “A young kid in the Bristol City youth team, ironically called John White, and John ‘Dusty’ Miller in the Ipswich reserve side, were two lonely companions that I played with throughout my career.

“It may seem ridiculous now to suggest that the biggest conflict was to overcome not the crowd or your fellow players, but yourself. I think back then I was always conscious of being different and that I would stand out when mistakes were made. Remember also that I had no father to lean on so I had to bear all these crosses alone.

“I can recall a couple of incidents on the field that may have been racially motivated but can only say may have been. I didn’t react well to either but anger is never a positive response”.

Steve speaks powerfully of the support he had from team mates. “My favourite place was the dressing room. Never in all my travels were any of the issues concerning race or colour raised in any dressing room. Here you were the equal of anyone. All that mattered was how well you had played. How much did you contribute to the team today? Enough to hold your place?”

Coming to Exeter (signed from Bristol City) was also a good experience. “I was the first black player at Exeter but did not suffer any racial abuse at any time. John Newman was an honest, friendly and knowledgeable manager and I liked him very much.

“Exeter and the Devon coast made for a great place to be and while we were there my family and I made the most of it. Usually on a Sunday we would take the two kids on a trip, perhaps Dawlish Warren or one of the other easy to reach beaches.

“We had a clubhouse in St James – a nice peaceful little place while we were there. There was not widespread team bonding but my wife Dot and I socialised with Bob Wilson and Barry Rowan and their wives – perhaps a meal and a drink in mid-week.

“What I do remember well is the long trips to away matches. I used to share a room with Fred Binney sometimes. Fred played the guitar; well his fingers hit the strings anyway! He was the away bus musician and on a trip to London the coach broke suddenly and Fred sat on his precious instrument. I do believe there were tears in his eyes.

“Fred and I went out before a game at Barrow and ended up in the naval dockyard, then home to Britain’s nuclear fleet. We started talking to some workers there when we escorted off to a small room and questioned as to why we had broken the submarine gate protocol. I think they feared we were about to run off with the country’s nuclear secrets. They had to ring John Newman to come and fetch us out of custody!

“But above all I remember Fred for the club song he wrote that was blasted out every time we took the field. I was embarrassed it was that bad! How it made the cut I have no idea. I used to have a copy of it.

“Another memory is of celebrities sometimes visiting the dressing room. Eric Morecambe and Ernie Wise put in an appearance and we brought in our kids as a real treat”.

Away from the game it wasn’t always so friendly. “I remember in the early days of our marriage Dot and I were on a bus and an ignorant man told Dot and I to go back to our own country. He obviously didn’t take into account that my father, who was black, had just fought in a vicious war in order to give this man the freedom that he now had to insult my wife and I”.

After his career ended in England Steve emigrated to Western Australia where he continued playing football and has a proud record of public service to look back on. “My journey took me to all three layers of government, local, state and federal, mainly involving sport and recreation. My last job before retirement was assisting the federal government in determining whether sport could help indigenous Australians to overcome the crippling social barriers that they face at the moment”.

Steve, who is now writing a book about his life, was pleased to hear about the equality work that the One Game One Community group do at Exeter. “I very much admire what your group does in combating discrimination. Racism is a complex and many faceted process from minor, major to incomprehensible. Please pass on my best wishes and a special thank you for what I believe is a very noble cause. Sport transcends race and colour. It’s the binding glue of humanity.”