International street artist Mohammed Ali aka Aerosol Arabic displayed his unique FutureCube outside Exeter Cathedral during August and September 2013. The FutureCube was initially exhibited at Exeter University, part of the Islamic Reformulations project which runs until 2015.  The Arabic word ‘Al Mustaqubal’, which means the future, wraps itself around the cube.  The cube is an interpretation of how religious belief is expressed in new ways in contemporary times. A special event was held at the Cathedral on 7/09/13 which looked at ‘Representations of Christian and Islamic Art in Public Spaces’, which was led by faith leaders and academics from the University’s Institute of Arab and Islamic Studies.

The artist, Mohammed Ali said: “Having created the FutureCube at the University of Exeter, where academia and street art met was exciting enough. Now, for the first time in my career I’ve been given a platform at a cathedral which is one of the UK’s oldest and finest monuments to show how public art can build bridges between faiths. Public art has been taken to another level. The city’s passersby can view the Islamic-inspired cube outside the Cathedral that represents the fast changing society that we live in.” Source: University of Exeter Research News. 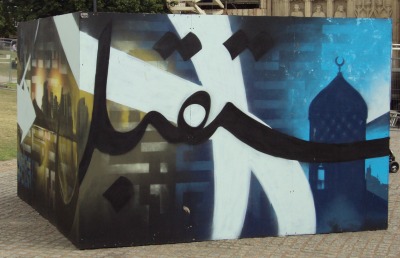