German Prisoners Of War arrived in the Okehampton area shortly after D-day, in June 1944.

During World War II Prisoner of War camps were numerous; there were sixteen in Devon alone. The only one of these to fall into the Okehampton district was Camp No. 673 at Bridestowe.

The camp, on the Leawood estate, comprised a number of huts surrounded by barbed wire. It initially housed Italian soldiers (captured during the fighting in North Africa) and, after D Day, German soldiers captured in France.

After the Second World War, farm production became heavily dependent on the prisoners, some of whom remained after the War. 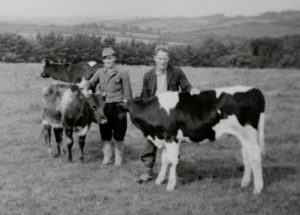 The camp only held low risk prisoners. Many worked on local farms during the week. On Sunday afternoons they were allowed to take a circular walk through the lanes, accompanied by a single armed soldier, which usually included a stop on West Bridge to watch the world go by.

Some of the prisoners were talented artists and craftsmen. The interior of huts were often decorated with beautiful murals and inside the compound several exquisite wooden models stood close to the barbed wire.

The artistic skills of the POWs were also harnessed for a beautiful hunting mural in The Fox and Hounds Inn at Bridestowe, which can still be seen today.  The mural of a fox hunt was painted by German POW Willie Brandt. . The story goes that he painted it because Hitler hated hunting and it so endeared him to the locals that he made Dartmoor his home. 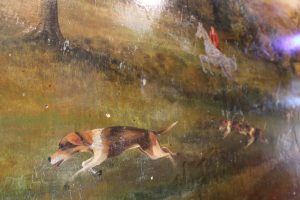 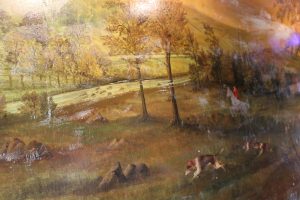 Prisoners of War were also stationed in the town proper.

‘Some of the prisoners spent their time making wooden toys. At Christmas each child at school was given one. I remember mine was a two-piece wheeled dachshund.’

Read more about the Bridestowe camp and POW’s here.