Adam Hassan is an A-Level student, who moved to Okehampton from Egypt around three years prior to his interview. He is hoping to study Computer Science and Mathematics at university, before going into Finance.

Adam was initially surprised by the welcoming reception he received from his peers when arriving in Okehampton, who have since become firm friends. Since arriving, he has gone on to become the Head Boy of his college, where he aims to inspire and nurture aspiration in his classmates. Adam describes how he hopes that listeners in the future will:

“Be open to people from different places”.

In his interview, Adam talks about the differences between life in Egypt and the UK; adapting to a change of country and culture; diversity in Okehampton; sharing his culture with new friends; and his aspirations and hopes for the future.

Listen to highlights from Adam’s interview below:

Click Adam‘s image to read the transcript of his interview: 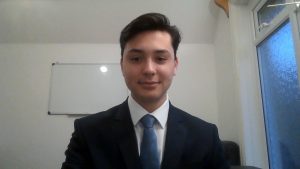