Daniel Leite was born in Portugal. He came to Devon around five years ago, after spending a period of time living and working in France. He now works as a chef, whilst also completing an Open University degree. Daniel currently lives in Okehampton, but has previously lived in several places in Devon, including Ottery St Mary, which he calls his favourite. When thinking about a message for future listeners, Daniel advises that:

In his interview, Daniel talks about the pace of living in Devon; his connection to history; Brexit; Portugal’s recent political history; and Ottery’s famous flaming tar barrels.

Listen to highlights from Daniel’s interview below:

Here is the stone Daniel refers to in his interview:

Click Daniel‘s image to read the transcript of his interview: 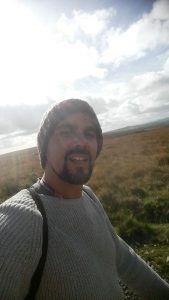