Peter Szypko lives in Sheffield. He is currently undertaking a research project to find out more about his father Aleksander’s eventful early life, including his time spent at the Okehampton Polish Naval Camp during and after the Second World War.

Aleksander Szypko was in the Polish Navy during World War Two and was, at one point in his career, stationed at the Okehampton naval camp. Peter recalls that Aleksander talked very little of either his early life in his hometown (which is now part of Belarus), or of his time in the Navy. As a consequence, Peter is slowly unravelling the threads of his father’s past in an attempt to discover a fuller picture, describing how:

“There’s a lot more there that needs to be said and told about it all”.

In his interview, Peter discusses his father’s medal for bravery, his research into his father’s time at the Okehampton camp, his own heritage, and his hopes for the future of the research project.

Listen to highlights from Peter’s interview below:

Click Peter‘s image to read the transcript of his interview: 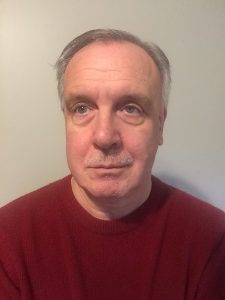