Dale Snow was born in Tiverton and discovered at the age of seven that her father was from Yugoslavia. In this interview, she talks about her father, Franc Rozic, and the circumstances that led his father to banish him from the family home in Yugoslavia at the age of 16.

Franc walked to Italy before joining the Royal Navy and eventually coming to Tiverton, via a series of displaced persons camps. Franc enjoyed playing darts and socialising with the local Yugoslav community.

Dale encourages others with dual heritage looking for family members:

“don’t give up, because you can find them in the end”.

In her interview Dale discusses her parents’ meeting and early relationship, visiting Franc’s birthplace as a young adult, and maintaining contact with family in Slovenia.

Listen to highlights from Dale’s interview below:

Click Dale‘s image to read the transcript of her interview: 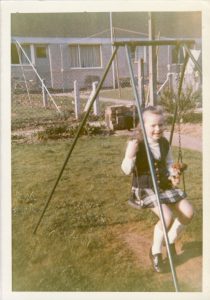