‘Mac’ Mudabbir Ahmed was born in a small town in Bangladesh. He moved to the UK in 1998, and lived in London until moving to Tiverton in July 2019 to open a business. He runs the Nawab restaurant, serving authentic Indian cuisine. Of the people of Tiverton, Mac says:

“People are very friendly, very talkative. Like when you get to know somebody, they don’t make you feel like you just met them.”

In his interview, Mac discusses the differences between living in London and Tiverton, the financial struggles of people in Tiverton, and reaching out via social media to encourage locals to share their cooking with each other.

Listen to highlights from Mac’s interview below:

Click Mac‘s image to read the transcript of his interview: 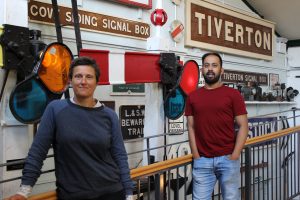