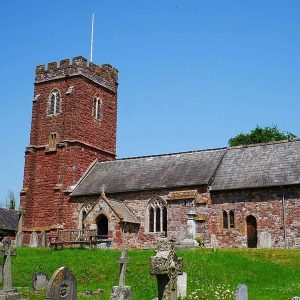 In the summer of 1001, Vikings ravaged the coast of Devon from a base in Exmouth. Around 4000 Vikings, driven away from the city walls, attacked Topsham and Clyst St Mary.

At Pinhoe they were met by the county army of Devon estimated to be around 1500 men, whom they defeated.

The site of the battle is reckoned to be at Mincimore Copse  between Poltimore and Pinhoe.

The church on the hill at Pinhoe stands on the site where the English dead were buried. Read the story of the parish priest and his contribution.