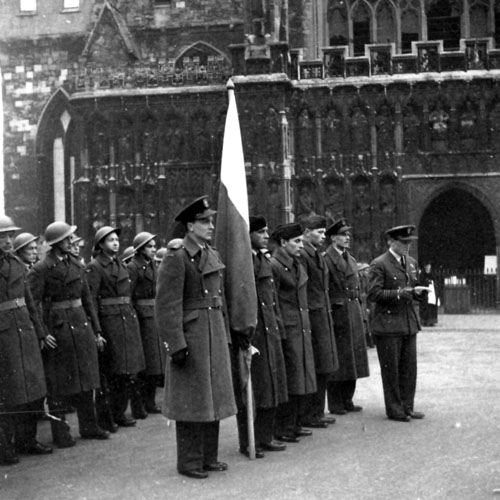 Between April 1941 and April 1943, Exeter was guarded by a squadron of Polish airmen, based at Exeter airport. They were the 307 squadron, known as  the ‘Night Owls’ or the ‘Lwow Eagle Owls’, after the Polish city of Lwow. They flew Beaufighters and Mosquitoes, suitable for night flying.

Community researcher Sally Ayres has written a report about this fascinating chapter in Exeter’s history. She acknowledges her debt to local historian, Michael Parrott, and his book, Exeter’s Guardian Angels.

In the photo on the right, Squadron Leader Jan Michalowski is making a speech in front of Exeter Cathedral, before the presentation of the Polish flag to the Mayor of Exeter, 15th November 1942.
From Michael Parrott, Exeter’s Guardian Angels, p.111.

307 Squadron helped to protect Exeter during the terrible Blitz days of April and May 1942. The city of Exeter has recently revived its memory of the debt we owe these men. Every November 15th, a new Polish flag is flown outside the Guildhall. As Sally Ayres says in her report “now known as ‘307 Squadron Day’, this commemorative event allows the people of Exeter to share in an act of gratitude and appreciation for the commitment made to this city by friends from far away, who fought for Exeter and with Britain, for a common cause”.

Story from the Express and Echo in November 2013