Vivien Clinton, who was black, was born in 1931 or 1932, possibly in Dorset. Her mother was Madame Josephine, who ran a herbalist shop in Clifton Road in the late 30s and early 40s (we hope to have her story on our timeline soon).

Vivien went to Bishop Blackall school from 1942 to 1948. There, she showed a talent for acting, and appeared in school plays. This school photo was taken in October 1946.

One ex-classmate remembered that, after leaving school, she was planning to get married to a blond Spanish man.

She then went on to act in the film of Alan Paton’s novel Cry the Beloved Country, which starred Sidney Poitier. The film won the Bronze Berlin Bear in the Berlin Film festival in 1952. Vivien played Mary, who marries Absalom.

That’s all we know about Vivien! There is no further record of her appearing in any other films. We don’t know if she did get married or not. She may still be alive. If you know more, please get in touch.

Our thanks are due to George Walker, Milly Cain, Val Collett (right, holding the Bishop Blackall school photo) and the Squire Sisters (Beth, Ann and Carol) for their memories. And Mike Byrne and his nostalgia page in the Express & Echo for his help. 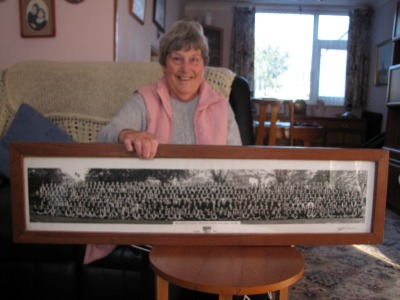