Ann Zielonka is a part time Health Visitor living in Sheffield. She is currently researching her father, Antoni’s, story. Antoni was in the Polish Navy during the Second World War and spent several periods of time in the Okehampton Naval Camp: both for training and in its later form as a resettlement camp. He seemed, to Ann, to be very comfortable in Devon, although he did not speak often of his time there.

Ann says of her father:

Ann is, herself, learning Ukranian.

In her interview, Ann talks about her research surrounding the Okehampton Camp, her father’s moonlighting work in Okehampton, the post-war Resettlement Act and treatment of Allied soldiers, and her father’s life in the UK after the war.

Listen to highlights from Ann’s interview below:

Click Ann‘s image to read the transcript of her interview: 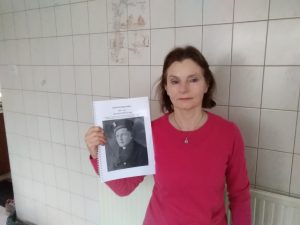 Click the logo for a summary of the interview: