The following summary has been written by volunteer researcher, Peter Szypko.

Peter Skrzypczak was born on 9 May 1921 in the village of Strycow in the Poznań province of Poland. His family moved to France in 1923. Although they had intended to return to Poland, as the situation worsened in Europe during the 1930s, they decided to remain in their adopted home.

Peter was one of hundreds who enlisted in the Polish Navy in France under British command in the spring of 1940. Peter initially served on the French Destroyer ORP Ouragon from July 1940 to April 1941, undertaking Western Approaches Escort duties.

Peter next served on the ORP Kujawiak, another destroyer, in the Mediterranean Fleet from June 1941. Unfortunately, in June 1942 the ship was sunk by a mine near Malta. He was cast adrift on his own for several hours in chill waters in pitch black night time conditions before fortunately being rescued by a motor boat. Sixteen of the crew lost their lives. He was next posted to the Polish destroyer ORP Slazak which was involved in providing naval support for the ill-fated Dieppe landing campaign in August 1942.

From January 1943, he served on the Polish cruiser ORP Dragon whose operations included participating in Arctic convoys to Russia. It then took part in the bombardment of the Normandy coastline in preparation for the landing by Allied troops at Arromanches on 6 June 1944.

“When we started shelling at first light in the morning, there were seven houses on the coastline, and one by one they gradually disappeared. The noise of the constant firing was incredible. I did think it was like the end of the world when they started firing. It was frightening. The larger British ships were behind us and firing over our fleet. The pressure was such that it was rocking us up and down like a yo-yo”.

The Polish cruiser was also lined up to assist in the liberation of Caen later in the Normandy operations but in July 1944, on the very day the attack commenced, the ship was torpedoed with thirty-eight of the crew losing their lives. The damaged ship was deliberately scuttled to form a breakwater, and the survivors returned to Plymouth to recuperate. He was reposted to the ORP Slazak in the Home Fleet from late 1944 to September 1946 following final decommissioning. By this time, he had risen to the rank of Leading Seaman.

After the Polish Navy was disbanded in March 1947, Peter remained based at the Polish Naval Camp at Okehampton after it had transferred to a resettlement centre for those who opted to remain in Great Britain. He married a local Plymouth lady, Iris, started a family (they had eight children) and began a new life on English soil working as a mason for various local building companies around Okehampton. The final firm he worked for prior to retirement was W.J. Avery and Co. Ltd.

The Mayor of Okehampton, Julie Yelland, kindly contributed to our research about the Polish people who settled in the local community after the war. She writes about Mr Peter Skrzypczak:

“Peter worked for W J Avery & Co Ltd in the early 70’s which is an Okehampton building company.  Peter’s occupation was a Mason. In Devon, a Mason is a qualified general builder as opposed to a Stone Mason. My husband thinks that he may have had some connections to the steel or gas industry prior to that. Peter was married to an English girl and they lived in Simmons Way, Okehampton.” [….] My husband remembers Peter saying that he was based at the Nissan Huts at the site of the Rugby Club in the 1940’s and that he was born in Poland but lived in France prior to coming to the UK.”

In common with many of those who spent a length of time at the camp, Peter never really spoke about what it was like there. The only aspect of that period his son, John, could recall him mentioning was the infamous street fight of September 1945 involving Polish servicemen and British paratroopers. 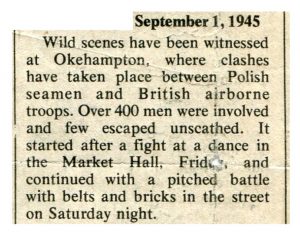 Peter represented the Polish Navy at football and joined Okehampton Argyle Football Club once he was based permanently in the town. He was a regular for the club from the late 1940s through to the early 1950s and later worked as a groundsman there.  He was regarded as “an acrobatic fullback”. His ability on the football pitch helped him to settle into the community.

His oldest son, Peter, followed in his father’s footsteps and served in the Royal Navy for thirty-six years, eventually attaining the rank of Lieutenant Commander. Peter Sr. was said to be very proud of his son’s achievement.